We work seriously and make steady efforts to achieve “Continue to be Shiretoko.”

Since ancient times, the Ainu people have found the existence of Kamuy, meaning god in the Ainu language, in various things in the natural world such as animals, plants and phenomena, and have treated them with a pious heart. The brown bear, called “Kimun Kamuy (mountain god)”, is also a kind of wild animal that has been valued for generations.

Shiretoko is a dense habitat for brown bears. However, the distance between humans and bears is beginning to collapse, and the relationship is in jeopardy. How can we coexist while protecting the place of human life, the habitat of brown bears, and each other’s territories? “Bear Act (Kuma-katsu)” was launched to find the solution. As you know, Shiretoko was designated as a World Natural Heritage Site in July 2005 because it was evaluated to have the characteristics of the interrelationship between the rich marine ecosystem nurtured by drift ice and the highly primitive terrestrial ecosystem. It was also highly evaluated that it is the important habitats of globaly rare species including salmon fish and marine mammals.

It is necessary to pass on the natural environment of Shiretoko to future generations in a sustainable manner. By doing so, everyone traveling in Shiretoko will be able to enjoy this nature permanently. Kitakobushi Resort and Shiretoko Nature Foundation threfore have joined hands to launch “Bear Act (Kuma-katsu).” In this project, we have been making indirect yet steady efforts to keep brown bears away from the towns where people live by mowing grass and holding lectures about brown bears.

“Continue to be Shiretoko.” This is the mission of us living in Shiretoko. We are now planning and executing various activities to fulfill the mission.
Case Studies
(The following article contents were written in the summer of 2020.)
Mowing bushes that have become the hiding places
of brown bears in order to keep brown bears away 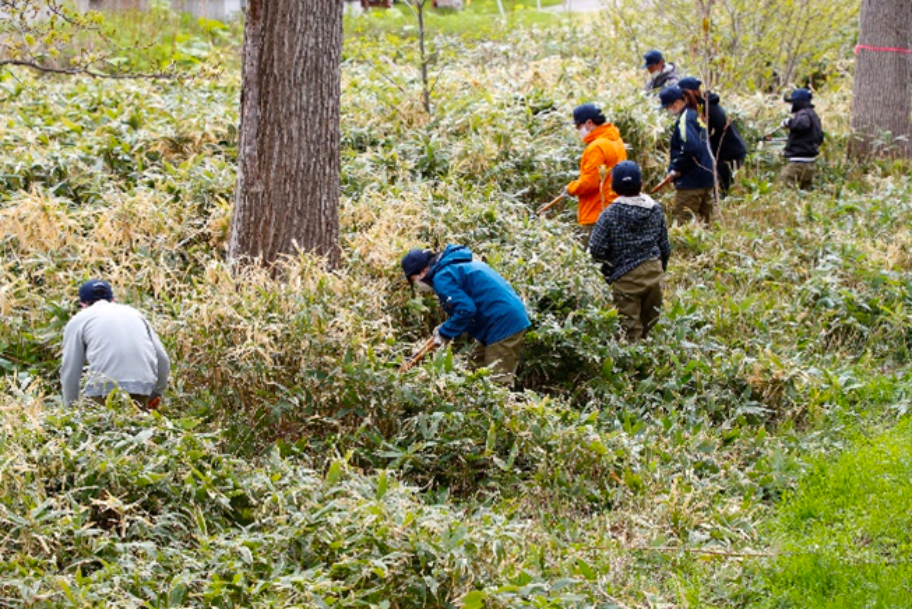 Why do we need to mow? That’s because it prevents brown bears to hide in the city. There was a case in the past that a brown bear used to hide in Utoro for a long time, and it eventually got found and exterminated. The mowing place in the photo is where the brown bear was actually lurking. By mowing at the actual site, it greatly helped the participants and staff to learn more about brown bears. 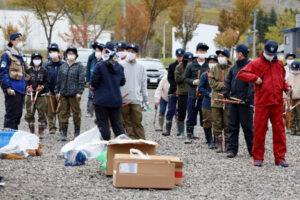 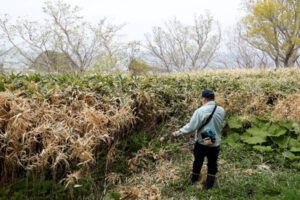 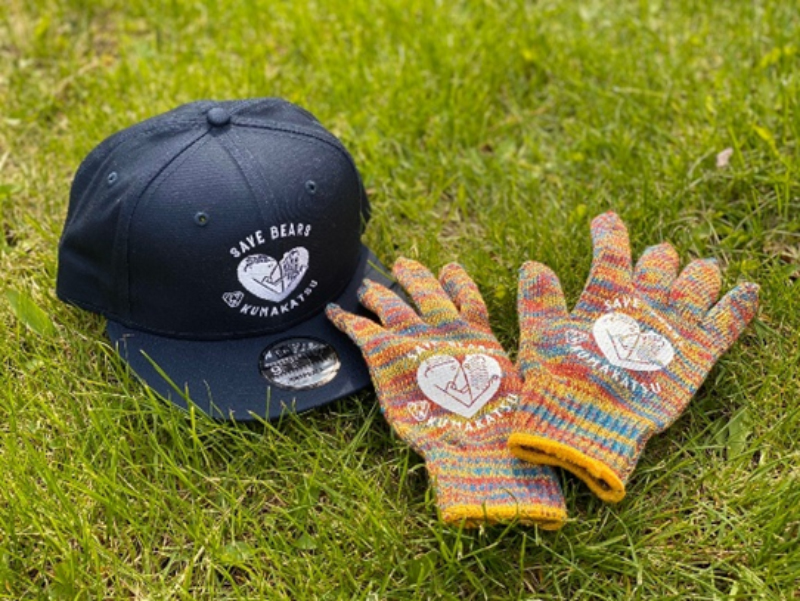 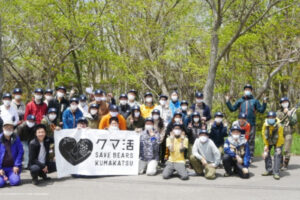 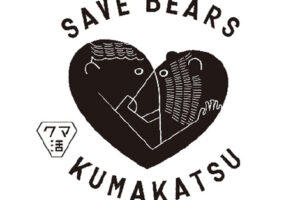 We created an easy-to-understand logo mark so that the activities of “Bear Act (Kuma-Katsu)” can be recognized by more people, and thus the motivation of the members can be increased. Kuma-katsu caps and Kuma-katsu T-shirts can be purchased at shops in Shiretoko. A part of the sales is used to fund the activities of Bear Act.
Lecture given by Shiretoko Nature Foundation to
deepen understanding of brown bear problems. 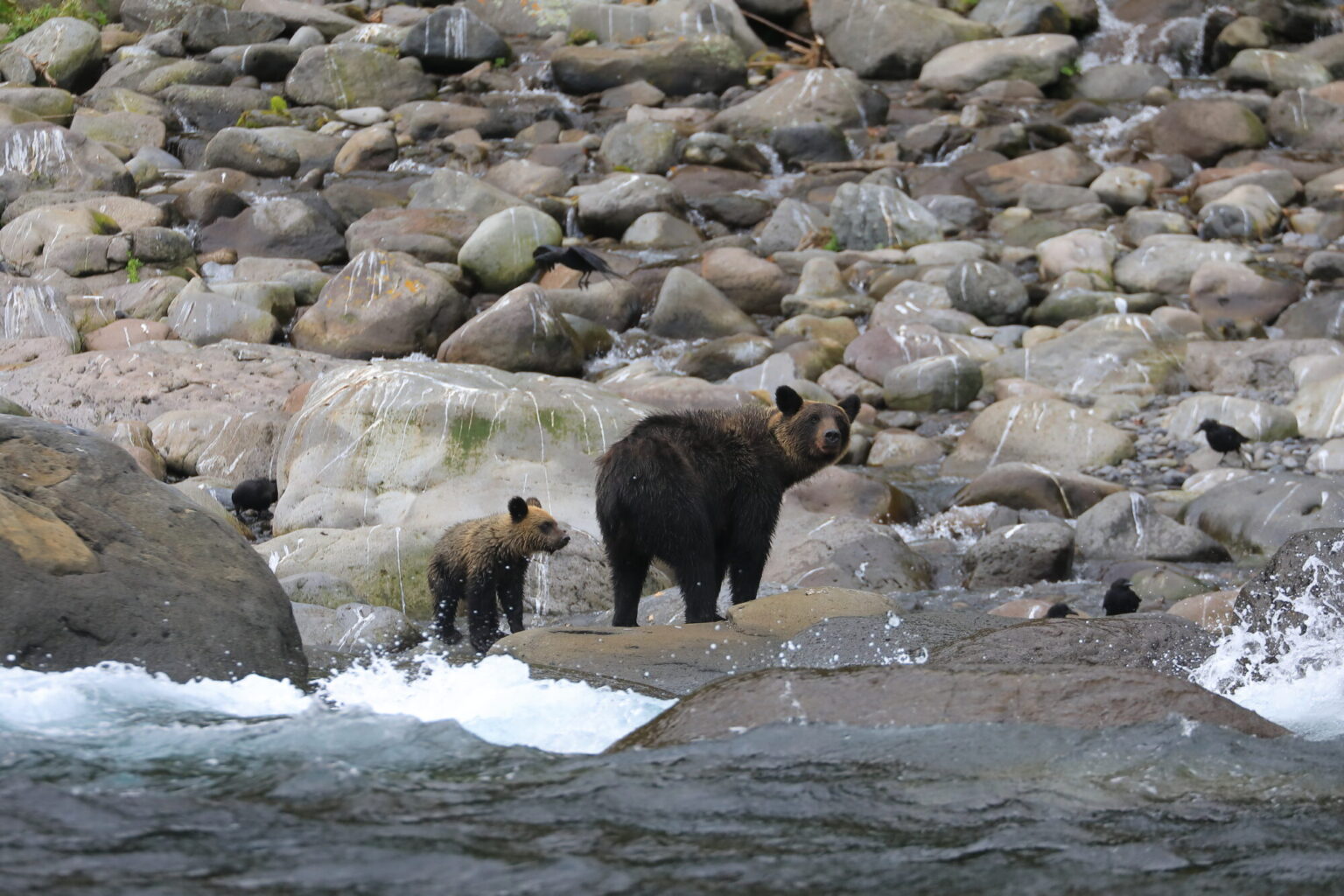 Shiretoko Nature Foundation gave a lecture on the brown bear problems to the staff of Kitakobushi Resort and those who participate in Bear Act. The reason why brown bears come out in the city and threaten people’s safety, and the sad consequences that those bears had to be killed. The lecture taught us that our inconsiderate actions such as littering garbage and feeding can expand the brown bear problems as a chain reaction. 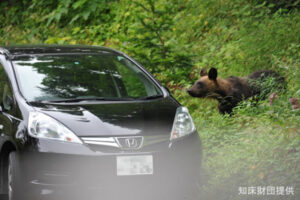 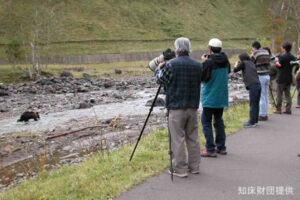 Future image of Bear Act
We are going to create a new tourism style by planning tours that incorporate participation in Bear Act while focusing on sharing information through SNS and lectures held at hotels. We would like as many people as possible to be aware of the efforts of Bear Act and continue to work together to create Shiretoko so that brown bears and people can coexist in peace. 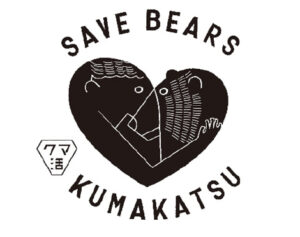